Between Books - X-Men: Children of the Atom 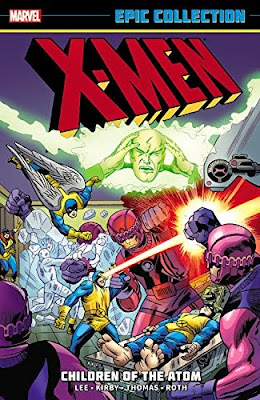 I have liked the concept of Essential format reprint books, providing a lot of comics for a respectable pennies per page.  But I have not liked how generally these collections have lacked color and relied on black and white to lower the price point.  So when Marvel announced their Epic Collection, reprinting past Marvel comics in collections hundreds of pages in length...and in color...I had to sample one of the volumes.  And since I have never read the original X-Men stories I knew exactly where I needed to go first!

X-Men: Children of the Atom collects X-Men issues 1 through 23 in a 509 plus page collection.  The volume starts as a new student Jean Grey joins  Professor Xavier's private school.  The four other students; Scott Summers, Hank McCoy, Warren Worthington, and Bobby Drake, like Xavier and Grey are mutants.  Mutants are extraordinary humans who have been born with genetic enhancements making them more than human.  Together the five students under Xavier's command form the team the X-Men.  The students have a number of challenges to face from evil mutants like Magneto and the Blob, changing public opinion, mutant hunting robots called Sentinels, and alien entities like the Stranger.  The Mutants must learn to harness their powers and work together if they are to survive this volume!

The opening stories are written by Stan Lee with art by Jack Kirby.  I have discovered I am not always a fan of the King's art.  And I generally am not a fan of his work in this volume.  For me what stands out is Stan Lee's writing.  That is not to say that much of it is not corn, because it is corn.  But as Walt Disney would point out, corn sells.  What Lee did was construct five solid young people that teens could relate to even today.  The group has relationship problems and struggle with concerns about fitting in.  And even decades later these themes stand out.  And I found myself shocked by how X-Men standards like Magneto and the Sentinels appeared so early in Marvel history.  Lee is eventually replaced on the title by Roy Thomas, who wrote Marvel's original Star Wars comics. And one can sit back and see how Thomas was attempting to build on Lee's work, while being really really wordy.  And I think both of them really focused on giving Proffessor X very specfic time measurements.

I still am confused on whey these issues have multi-colored word balloons.  Seriously, it is not like the baloons are color coded!

Cyclops, Marvel Girl, Beast, Ice-Man, the Angel and Professor Xavier have a long and storied comic history.  And the X-Men has always been one of my favorite super teams.  I loved this Epic Collection and found myself hungering for more.  I personally dove into every one and then washed it down with an episode of The Danger Room podcast, which I highly recommend, and was saddened when I ran out of issues in this collection to enjoy.  I look forward to future X-Men Epic Collections, and have already dove into another Epic Collection enthusiastically.

Posted by Between Disney at 6:40 AM