Between Books - Heir to the Jedi 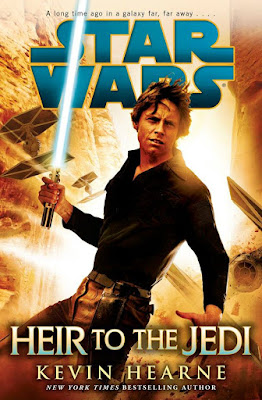 In Heir to the Jedi by Kevin Hearne, Luke Skywalker wishes to continue his Jedi training.  But he lost his master and teacher before he could even really complete many lessons.  Now the young Rebel finds himself struggling to discover the ways of the Force without a guide.  Luke is tasked to find a new supply route using smugglers.  But before he could complete the new alliance, he finds himself tossed into a mission to save a Slicer, hacker, from the Empire's control.  To save the unseen Slicer, Luke will put his life on the line against an merciless foe just so he can have the supplies needed to free the Empire's prisoner.  Luke does all of this while exploring a new relationship with Rebel Nakari Kelen who may be slowly stealing his heart.  The would be Jedi does all of this while worrying a traitor could be in his midst.

Honestly, this is a small story.  And that is really okay.  The story is told from Luke Skywalker's perceptive which allows you to go into his inner thoughts, and fears about being able to achieve the title Jedi.  It is really a street level story that revolves around 3 people in a galaxy far away.  And again, this is good.  But there is little tension for Luke's future since you know he is going to make it to the next movie, though you spend enough time with the two new figures that some tension can build.

Though it is a small story.  And it never fully pulled me into the tale like I hoped it would.  There are parts horror, parts jail break and parts chase all this in tale and I like those elements in other stories (okay I do not dig horror) but they just did not pull me in like I wanted.  I will admit that the chase element felt really like Tarkin to me, just abbreviated.  I think the issue for me is the promise that Heir to the Jedi was gong to outline how Luke put himself on the path to being a Jedi.  And it does somewhat but never really pays off the way I wanted.

Heir to the Jedi helps shed light on Luke Skywalker's early days as a rebel, how he looked at learning about the Force and his romances an early Rebel.  It was fine book worth a read.  But I would likely recommend a borrow like I did.  Honestly, there is something about Star Wars that works best with a visual element like a comic, cartoon or live-action movie.  But I will admit I really dig seeing the Disney and LucasFilm logos side by side on the back of the book!

Posted by Between Disney at 6:09 AM