The day I was born the Disneyland Park was open until 1 a.m.  Sadly as an adult visiting for the first time it was only open until midnight.

We have all dreamed about walk-on conditions when visiting a Disney park.  But I don’t think any of us can imagine December 14, 1961.  It was a bit nippy and rained some. But on that Thursday there were only 523 guests in Disneyland.  Let me say that again, 523! 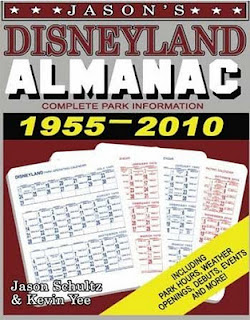 I know these facts thanks to Jason’s Disneyland Almanac by Jason Schultz and Kevin Yee.  Jason’s Disneyland Almanac collects the opening and closing times, temperature highs and lows, precipitation, and major openings, closings, events, and potential important guests to the Disneyland Resort from it’s opening in 1955 until 2010.  In fact the authors have gathered operating hours for the resort for all but 773 of 20,257 dates.  The real delight of this almanac is the attendance data for dates between July 18, 1955 to December 31, 1966, taken from Roy O. Disney’s Disneyland Attendance Summary.   This historical record provides us with data that Disney executives do not generally make available about the park today.

This book is about the numbers.  There is some narrative and background but not in great amounts. Really it is the numbers that tell readers the story of Disneyland. Especially interesting is the attendance data from the early years of Disneyland Park.  One will be shocked to see days with especially low attendance, closures due to weather and trends that don’t match current Touring Plans Crowd Calendars.  For example, look closely at the attendances for Christmas in early Disneyland and consider equivalents today. Also readers will be surprised to find regular park closures, could we even imagine the parks closing on a regular basis even during today’s “off season?”

I am a big baseball fan.   Amongst baseball fans there are sabermetricians, the fans who use statistics and numbers to dig deeper into the story of the game.  This book is for the Disney sabermetrician, a source that provides the raw data for the examination of park trends.   And even the non-numbers minded enthusiasts, like me, can see trends that help us to better understand the park today.

The data itself and the authors’ methodology in collecting it appears as solid as possible for someone without access to Disney archives and records.  They do admit that there could be errors and mistakes as much data such as closures and park times were gathered from primarily public or second sources. So they warn that errors could be present.  I chuckled as I found one related to my first trip to Disneyland; as the text states that Glow Fest closed on the day I arrived at the Disneyland Resort for the first time, when I know that in the week following the stated closure that I participated in the event twice.  I believe this is due to an extension of Glow Fest; an extension that I believe was not listed in documents that provided the original dates for this party.  Who would have guessed that it was going to be as popular as it was?

On February 19, 2001, Disney’s California Adventure (with the ‘s at the time) was open for two hours later than Disneyland Park.   Shocking? Not really, because an examination of page 262 of Jason’s Disneyland Almanac will help the story unfold.  Numbers sometimes provide their own narratives!