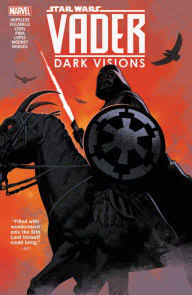 They say everyone is the hero of their own story.  And as I read the back cover of Star Wars: Vader - Dark Visions by Dennis Hopeless and a team of artists I thought I was walking into a story that made the villain a hero.  Instead, I found myself immersed into a very different set of tales.

Star Wars: Vader - Dark Visions provides five separate short stories, all originally offered as single issues in a series.  The stories, unlike what I thought, do not provide us a unified story with Darth Vader as the hero.  Instead they are all views of the Sith Lord which show us how others view him.  In a world who does not know of the Empire, a youngster views the Dark Lord in action.  An Imperial Officer finds himself awaiting Vader's arrival, an arrival he dreads.  A young X-Wing pilot is faced with Vader in battle.  A nurse on the Death Star develops an infatuation with the armored knight.  And finally, we feel the intensity of being hunted by Vader.

Honesty, one of the most challenging tasks in comics is writing a single issue story.  And Hopeless really succeeds  Yes, the premise of the series works to support the changing tales and views.  The stories truly do not connect other an a character viewing Vader in action.  And some of the stories are stronger than others in my view.  But the collected volume is enjoyable and like the Dark Horse story "Five Days of Sith" demonstrates the true evil of Vader and the impact his actions have on others.  For those who want to dive into the evil that is Darth Vader, Star Wars: Vader- Dark Visions will be an interesting ride,

Posted by Between Disney at 6:27 PM