Between Books - Window on Main Street 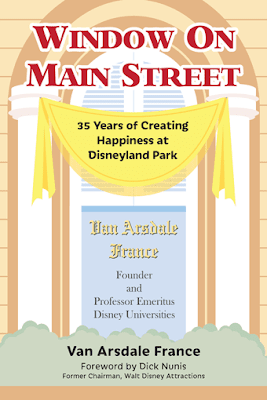 As I look through my wishlists there have been a few books that have eluded me. Frustration about this often mounts as I read other Between Books which reference these volumes. One such book is Window on Main Street: 35 year of Creating Happiness at Disneyland Park by Van Arsdale France. So it definitely felt magical when a new edition of this book was listed, finally making the book something I could add to my shelves.


Window on Main Street: 35 year of Creating Happiness at Disneyland Park by Van Arsdale France is the Disney Legend’s memoir outlining his years with Disney from before the opening of Disneyland into the 1980s. France details not just his role as a training expert for Disney, being brought into Disney by friend C.V. Wood during park construction. Along with training new staff for Walt Disney’ park, France outlines literally helping to build the road to the park…sometimes with beer. After the departure of C.V. Wood, France would eventually follow his sponsor to new parks. After a few years of being outside of the berm his former employee Dick Nunis would recruit the organizational expert back to Disneyland. Upon his return, he outlines a number of key projects including the creation of Disney University, training cast members after the death of Walt Disney, training for the opening of new parks including Walt Disney World, and fighting to stay out of retirement while working at the Disneyland that he invested so much of his life to.

Theme Park Press is the publisher of this new edition. And it is really a new book in many ways. The publisher did not reprint the book as previously offered, but instead chose to publish the longer original manuscript. And personally I like the idea of being to see more of the late France’s thoughts and observations. So I really like this book and am thrilled it is no longer a dream to own of copy.

One of the biggest takeaways for me was that Van Arsdale France was more than a trainer. Before Disneyland opened along with training he was also serving as a liaison between the Highway Patrol and road construction crews. Sure we have heard stories from cast like Bob Gurr that make it clear that staff did new and different things as the needs of the park demanded it. But I read France’s experiences and see an corporate executive who is training cast, overseeing construction and in some case serving as a publicity director to key groups. It was a big and varied portfolio. To make his career even more varied he took on other jobs including area supervisor, at least temporarily. It was truly a varied Disney career and not as focuses as I believed.

We also get to see his thoughts on other key Disney personalities. I cannot think of many books of inside Disney staff who discuss the key role of C.V. Wood. France was a Wood protégé in many ways and paints a realistic yet favorable picture of a man that Disney history often forgets. Additionally, we get to see much of Dick Nunis, a man that France hired and would eventually hire him. It is clear that France admired Nunis, and anyone who would think to deny it should examine the book’s picture inclusions.

Window on Main Street: 35 year of Creating Happiness at Disneyland Park by Van Arsdale France is a book I am thrilled to have on my shelf! Disneyland and Disney history fans will find this to be a must have title, especially since they have wanted it for years. And Van Arsdale France and his friendly but honest recollections will not disappoint as he tells of strikes, Yippies and more.