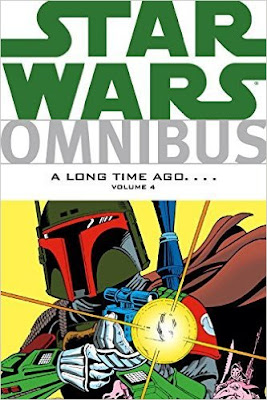 I do love me some Star Wars!  I have to thank Disney for buying LucasFilm and reinvigorating the franchise.  And one of my favorite parts of this renewal is taking the time to look back at the Marvel Star Wars material from my childhood.

Star Wars Omnibus: A Long Time Ago....Volume 4 reprints Marvel's original Star Wars issues 68 to 85 and King-Size Annual #3.  The majority of the stories are set between Star Wars Episode V: The Empire Strikes Back and Star Wars Episode VI: Return of the Jedi.  Luke, Leia and Lando split their time between missions to find Han's frozen body and track down a Rebel agent with important information, could it be about a new super weapon?  The three are continually on the run from bounty hunters, the Empire and aliens a plenty.  But really the stories serve to fill the time between the two movies.  This is followed by the Return of the Jedi adaptation and the return of writer Archie Goodwin and artist Al Williamson.  In the wake of the movie readers witness the Rebels attempting to make efforts to legitimize their new government, Han attempting to make a fortune for himself to win over a certain princess, the "return" of Boba Fett and more.

I have several thoughts, but my biggest one is I continue to love this material.

In the pages of the Marvel comic before Return of the Jedi, Leia wears a bikini.  And a young alien has a reaction similar to young Between Disney when he saw it later.  And the fact I got to witness this is a comic, before the movie came out, simply made me snicker like a school boy.

The highlight is the return of Goodwin and Williamson.  Their combination of art and writing really did create a classic.  And I loved seeing Marvel bringing them back for what was truly a very special event.  I have also come to enjoy the writing of Jo Duffy who wrote the majority of his volume.  Between her work her and Power-Man and Iron Fist, Duffy shows her skill as a writer.  She developed stories that fans wanted to see, like the return of Boba Fett, perhaps before they knew they wanted them.  And you really have to give her credit for taking on what could be seen as two losing battles, filling the time between movies and determining what was next in Star Wars before there was an Expanded Universe.  We really should hear more about this important writer, a women who was writing a male centric comic book in the 1980s!  And while her work is not canon any longer, it is fun and does truly deserve the heading of "Legends".  It is a title I think we should give her also.

I love the out of print, but still available digitally, Star Wars Omnibus: A Long Time Ago...Volume 4.  The stories and art are a piece of my childhood which I love revisiting now as I share new Star Wars with the Between Kids.  I can truly say I enjoyed reading every page of the volume!

Posted by Between Disney at 6:23 AM