A goat munching on dynamite!

A miner enjoying the bath!

Strolling the streets of Rainbow Ridge!

Yes, you have entered the world of Big Thunder Mountain!

Disney Kingdoms Big Thunder Mountain Railroad #1 written by Dennis Hopeless with art by Tigh Walker takes the reader to the Arizona Territory of 1878.  Abigail Bullion travels from the East after the death of her mother to join her father as his oversees the family's mining operation.  But Big Thunder Mountain locating at Rainbow Ridge is not producing gold in the same quantities as the past.  Some speculate that this means they should dig deeper.  But Chandler, a young and handsome miner, speculates that the mountain is telling them to stop digging deep.  Abigail explores her new home and sneaks herself into the mine so she can see the source of the family's finances.  But while in the mountain an incident occurs that leads readers to question who is that masked man?


Overall I think the creative team puts up a solid effort.  Hopeless has written several titles for Marvel in the past.  But I will admit that most of his titles I have read in the past were superheroes.  So I was I was a little worried that he would not pull off a Western story, especially since the genre is not a personal favorite.  And I will admit he succeeds with this issue feeling different than his work I have read previously.  I do think this is more text heavy than Figment, but I never felt it to be too wordy.  and best of all, he provides a story around the back story we already know for the roller coaster.  Walker's art feels like you are brought into the old West.  Though my favorite moment may have been his first appearance of Mr. Bullion, who I think most looks like his inspiration Tony Baxter (the designer of Big Thunder Mountain Railroad) in his first frame.

Abigail is a strong role model for young ladies.  She is somewhat non-complaint to her parents, which is a concern for the parent in me.  But she is clearly strong-willed and determined.  She demonstrates that she is teachable as she explores Rainbow Ridge.  And she seeks knowledge.  I personally think she is lead character that both boys and girls can relate to as she has qualities that everyone should admire.

But as Bob Iger reminds us, Disney must remember the boys too!  And I think that Chandler is going to grow into a character that boys, and again girls, can admire.  He appears to be concerned with doing an accurate job while also being kind to the environment.  And he is truthful.  But if this young man does not serve the bill as a boy role model, I am fairly sure that the unknown masked man will provide a outlaw attitude that will attract young males. 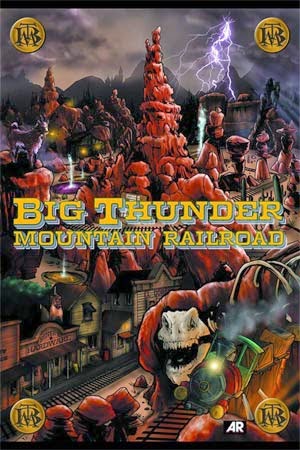 It has been awhile since the last Disney Kingdoms release and I have missed having a regular release of a Disney Parks themed comic.  I am not a Western guy, but I do love Big Thunder Mountain Railroad.  And the choice to stick close to the Imagineering back story really worked for me, instead of providing new reveals early.  I look forward to Hopeless and Walker playing in this world and more Easter Eggs tracing the story back to the classic roller coaster.
Posted by Between Disney at 6:23 AM