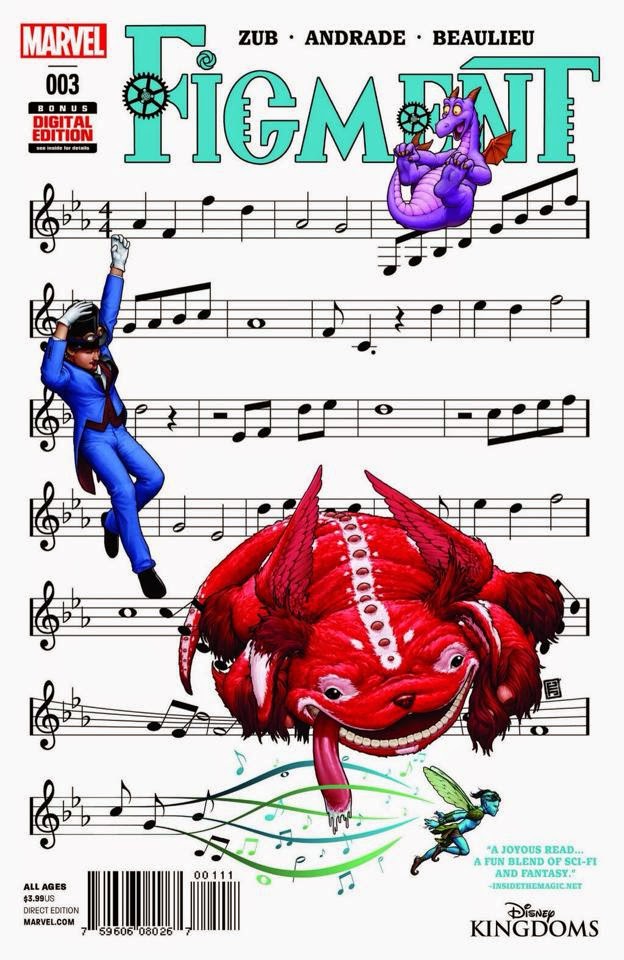 From the sound of it, Blarion Mercurial is in some trouble!

Blair and Figment have been arrested by the Sound Sprites for making bad sounds.  The sprites have used their control of sound to create a net to capture the duo.  In their imprisonment they meet Fye the Flawed who has been arrested for his bad audio.  The trio must learn the rules of the game in the Audio Archipelago and imagination could be the key.  Meanwhile back on Earth, Chairman Illocrant and the Singular take steps towards bringing us all order!

The first two issues of Figment have gone to second printings, which I think is awesome.  I had to create a pull list at my local comic shop or I would not be getting the title.  And this is all great news and the title has been in the news a lot.  But I have noticed that the success of Figment may be giving the impression that this title is much more successfully than Disney Kingdoms Seekers of the Weird.  Let us do some comparison.  According to comichron.com, the first issue of Seekers sold an estimated 24,910 copies.  It went to second printing.  The first issue of Figment sold out and went to reprint with 12,735 copies.  So, Disney has created a demand by giving us a beloved character in a title with half the copies!  Now Seekers did see a big drop off, with issue #5 selling 7, 185 copies.   And perhaps this is Marvel's strategy of controlling the drop that naturally occurs in a mini-series month after month.  They are partially creating a demand by printing less than they did of Seekers!  Oh, and they have cut down the number of variant covers being offered!  Now, I personally do find this interesting because I feel like a little social engineering is going on.  But I want people talking about Figment, so I will just keep smiling and buying my copy.

Now the great news is I have read the first two issues again.  And both kids are excited to read this third issue.  The Between Kid who I read the first ones to, grabbed it and asked if we could read it now.  And I did get a little stressed out as I am looking at it as a collection not literature!  I love it, an all ages comic that all ages are enjoy while I am picking up a Disney collectible!

I found this story interesting and engaging.  Jim Zub continues to craft a story that makes me want to see what is next.  And I do feel like the spirit of imagination is bursting from the pages.  In fact at one point where imagination was needed, I found myself dreaming up options of what could come next.  And the youngest member of the Between Family wants to meet Blair's new and interesting friends as drawn by Filipe Andrade.

Figment #3 continues to be a win.  And I am anxious to see where the next installment of this adventure is going.  And maybe we might all learn to dream a little more while we dive in.