Between Books - All the World's a Disney Stage 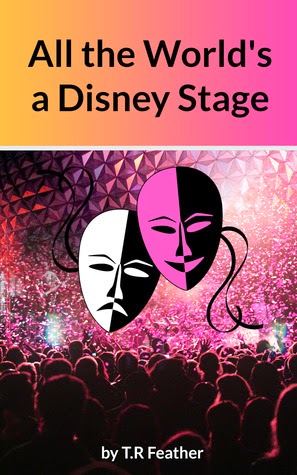 What is it like to audition as a performer at Walt Disney World?  What is the life of an entertainer in Disney employ, do you work 4 hours a day?  These questions and more are answered in All the World's a Disney Stage.

All the World's a Disney Stage: Performing for the House of Mouse by T. R. Feather is a brief memoir and how-to-book discussing one Disney performer's audition and tenure at Walt Disney World beginning in 2011. The text discusses how to audition, the daily life of a Walt Disney World  performer, and discussions of the events themselves.  Feather shares his own personal observations about what it takes to be a Disney entertainer and how to make it a career.  The volume ends with Feather's own observations about his future as a Disney performer.

This really is a short volume.  The print edition is listed as 108 pages.  It is a quick read, I read the Kindle version, and it does not feel like a full 108 pages.  One should be able to read this book in an hour or less.  The writing is clear, but I often wished Feather would expand on points.  There were moments where he would make mention of Disney blogs that covered the topic.  I hoped at this point that he had expanded his conversation instead of suggesting looking elsewhere, without a specific suggestion of where to go next.

The book would serve of interest for anyone wanting a basic discussion of working in Walt Disney World's entertainment department.  Feather makes it clear how exhausting it can be to work a parade and what the long hours of an entertainer are.  Additionally, he shows the need for perseverance to land the desired role  And for 99 cents there is real value in the shared experience for other's knowledge.  And he makes it clear that  globally professional entertainers want and seek out Disney roles making landing a position even more difficult.  However, I would not recommend $8.99 to read the physical book.  I obtained a copy for free.

All the World's a Disney Stage takes the reader into the parades and performances that we love.  But Feather makes it clear that it is not all fun and games.  Being a Disney performer long hour and hard work. But making the magic pays more in satisfaction than dollars.
Posted by Between Disney at 5:10 AM